About My Electric Car

ABOUT MY ELECTRIC CAR 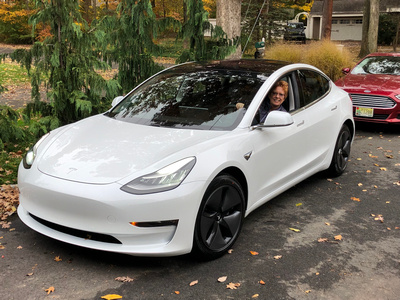 I switched over to an electric car today. It is a Tesla Model 3 Long Range Dual Motor (AWD). It doesn’t have Enhanced Autopilot (that is an add on option). It isn't the higher end performance version.

I live about 20 miles outside of Manhattan in New Jersey. I am a pretty frequent mass transit user, but use a car most days to get around. I strongly support further expansion of mass transit which tends to focus, in NJ, on getting in and out of NYC. NJ has 900,00 daily mass transit users and NYC has the largest mass transit systems in the country.

For the past 5 years I have leased 2 consecutive Ford Fusion plug in hybrid cars with the ultimate goal of purchasing a 100% non internal combustion engine (aka ICE) car. I attend the NYC car show every year, quizing carmakers on where their upcoming technology is headed. This past Spring, I saw ICE cars, pure electrics, hydrogen fuel cell, plug in hybrids, and diesels. Carmakers seem somewhat confused about where the market is going. And many Americans are not really interested in high mileage vehicles. Carmakers love to sell gas guzzler SUV’s and trucks because the profit margin is so high.

But I like high mileage vehicles. My Ford Fusion Energi plug in hybrid gets a combined effective mileage of about 60 mpg (44 mpg on hybrid, “999 mpg” on electric). And it had a lot of really great amenities. It only has about 20 miles of electric range, but if I am only running errands or making short trips I can just plug it in again and hardly ever fill the gas tank. It has some downsides: the battery takes up half the trunk and Ford has decided not to make the car anymore. My lease is up next month so I decided the time was right to ditch the ICE car.

I kind of feel sorry for car companies. Many are making several different types of car technologies. That has to be expensive and complex.

Hydrogen Fuel Cell: Toyota is making the Mirai hydrogen fuel cell car. It is pretty cool BUT, there were only 3 hydrogen filling stations in the entire tri-state area as of last Spring. Hyundai (NEXO) and Honda (Clarity) are also doing hydrogen fuels cell cars. So maybe in 10 years......

Diesel: Guess what, a couple companies got into serious criminal trouble for manipulating their software to make it look like their emissions were low. 2 VW executives are in jail for this and the former CEO of VW parent company Audi was arrested a few months ago. VW has paid many Billions in fines and judgements. Porche also got in trouble for this.

Electric: The biggest issue for widespread adoption of electric card has been range anxiety. Most people want at least 200 miles range and until recently almost no company was producing cars with high range. Now there are a few. The reality is that electric motors are simply much more efficient than ICE (internal combustion engines). 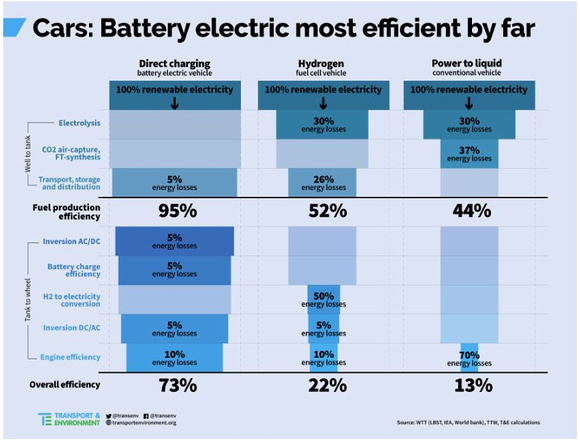 Electric cars also have many fewer moving parts.  Many fewer parts to repair, wear out.

Right now, I could buy a high range pure electric Chevy Bolt for not too bad a price. The range is good (238 miles). But I don’t really like it.  I think it is ugly. And I am pretty into aesthetics. I also don’t like GM very much. In case you didn’t follow this, GM was responsible for killing about 150 people and  injuring many others because they did not want to upgrade to a $1 more expensive ignition switch.  No one went to jail for that.

The Nissan Leaf is pretty nice and a good price.  It gets 151 mile range. Next year it will get 220 miles range.

Three years ago I considered a Tesla, but the Model S and X were too expensive for me.  I was pretty excited when I read about Tesla making a lower cost, mass produced electric called the Model 3. I know a few people with the Model S and they all like them. I didn't put a deposit on a Model 3 in 2016 because I had just signed a 3 year lease on my Ford Fusion.

Obviously, if you read the news, it took Tesla months longer to ramp up production than they projected. And they won't start making the $35,000 base model for a few more month.  I had always planned to get the long range upgrade (310 mile) and I saw that they were making a dual motor (AWD) so I put a refundable deposit on one in March 2018, put a full order in on July 2 and am picking it up today (Nov. 2).

As an added bonus, electric cars have instant torque. My car will have a 0-60 of about 4.5 seconds.  That's not why I would buy it, but it kind of sounds like fun.

In New Jersey, I will pay ZERO sales tax for my electric car.  That's because I live in a state that is incentivizing getting ICE cars off the road.  I am sorry if you live in a less enlightened state.  Pressure your leaders to care more about the environment

But, What is the Source of your Electricity, you ask? And what is the global warming emission of electric cars on a life Cycle basis

Every state produces electricity using a different mix of fossil fuel, nuclear, natural gas and sustainable sources such as solar, wind etc.  On the positive side, with the proper leaders in place, our electric supply can become more and more sustainable. The Union of Concerned Scientists (which is a highly regarded group) did a state by state analysis of this issue as it relates to ICE vs electric cars as well as life cycle emission.  I invite you to read it. " Over their lifetime, battery electric vehicles produce far less global warming pollution than their gasoline counterparts—and they’re getting cleaner."

How many miles per gallon would a gas car have to achieve to produce global warming emissions equivalent to an EV? The answer depends on where you live. Numbers based on the EPA's eGRID 2015 database. 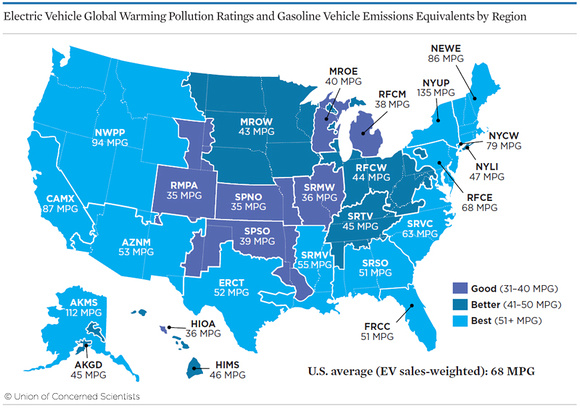 Solar Power at my House

I really want to install solar panels on my house.  It makes sense financially and environmentally.  My husband is not onboard right now.  But, hopefully I can convince him.  My brother in California has a solar paneled house and an electric car.  He was years ahead of most people.

But What about the Cobalt issue in Electric Car Batteries?

All lithium ion batteries (your cell phone, laptop, camera or electric car) contain some cobalt to stabilize the cathode.  The issue is that the main source of cobalt is the Democratic Republic of Congo and there are serious ethical issues in DRC mining.  EVERY battery maker is looking to reduce or eliminate cobalt in their batteries through engineering solutions.  Tesla has reduced their use of cobalt by almost 60% and is committed to further reductions. They have also had some sourcing issues: a Canadian supplier was sourcing from Cuba (which is still under the Embargo) so that ended.  This is a battery engineering and chemistry issue that needs to be solved. Wholesale recycling will also happen, because the chemistry is too expensive to throw away.

But Tesla does not use UAW workers

That is true.  I think it is possible they will vote to unionize at some point.

But what about worker safety?

I used to chair the EHS (Environment Health and Safety) committee for my company's entire research division so I take that issue seriously.  Tesla did have injury rates (predominantly repetitive stress injuries) higher than established carmakers, 8.8 per 100 workers versus 6.7 per 100 for the industry standard in 2015.  They were accused of under reporting injuries in the Reveal report. This has been investigated for the last 4 months by Cal-OSHA. Tesla said very recently that the under-reporting was debunked by this OSHA investigation, but I will wait to see the official report.

The Model 3 has NHTSA 5 stars over all and 5 stars in every sub-category. It also has a very low roll-over potential because of its low center of gravity.

You hate billionaires; Elon Musk does and says some crazy stuff. Well, yeah, you got a point there.

Who Does Not Want You to Buy an Electric Car or a Tesla?